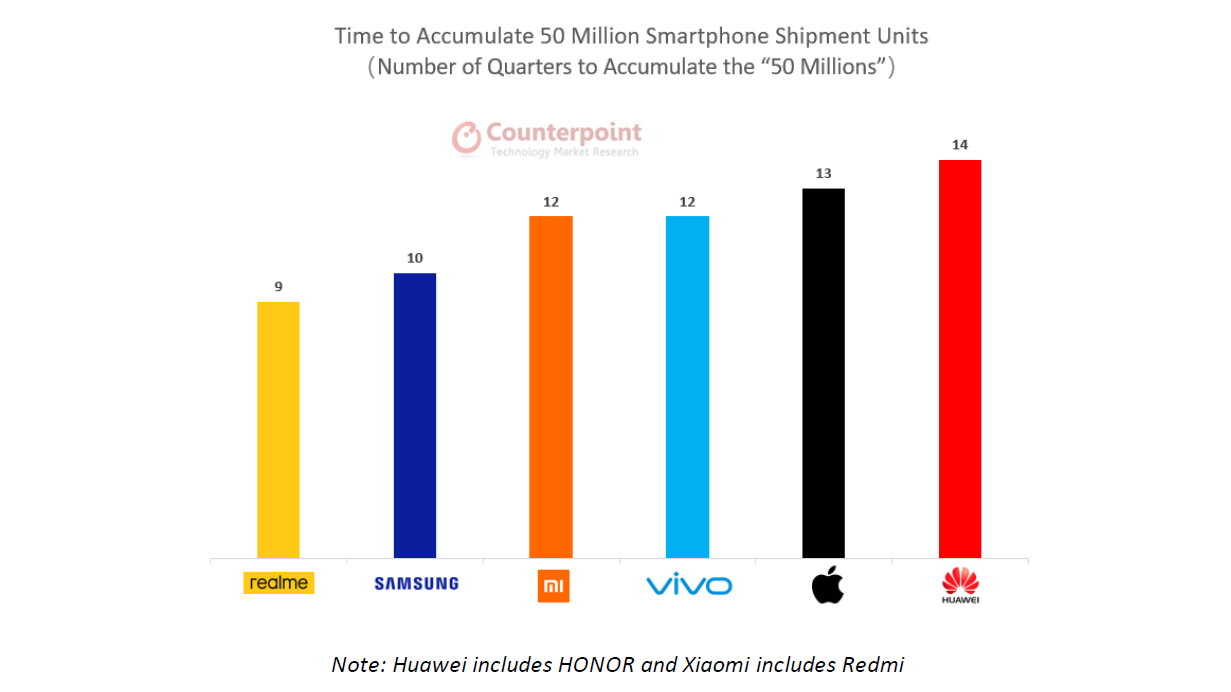 Lahore, October 31, 2020 – realme, a young and trendsetting technology company, has just been named by Counterpoint’s Q3 2020 smartphone shipment report to be the fastest growing brand to reach the 50 million smartphone sales milestone. Channeling the energy of youths and young professionals, who form the bulk of its fans and customers, realme leapfrogged global competitors to this achievement in merely nine quarters. In addition to this milestone, realme also recorded a history high level of quarterly shipments as 14.8 million and is the world’s fastest-growing brand in Q3 as it grew 132% QoQ for the quarter, gaining momentum and surpassing analysts expectations.
According to Counterpoint, realme’s growth rate in shipments volume represents “the strongest growth momentum among major global OEMs”. realme accelerated to 50M sales because it enjoyed great success with youths and young people all over the world, with this segment of users making up most of its customer base. realme has gained a niche following amongst youths globally, given how diverse this user group is across countries and cultures. “realme grew to become one of the top 5, or even top 3, brands in its key markets, including India, Indonesia, Bangladesh, Philippines and some other Southeast Asian countries”, says Research Analyst Abhilash Kumar at Counterpoint.

Source: Counterpoint Q3 2020 Global Smartphone Shipments Report
realme, whose slogan is ‘Dare to Leap’, adopts a strategy of selling leapfrog performance and trendy design-driven quality products that resonate with its young crowd at an affordable and attractive price points. “With its efforts to bring the affordable yet premium-like products to consumers, as well as its ability to offer smooth digital shopping and after-sales services in different countries, realme has emerged as the most resilient brand during and after the pandemic crisis”, Research Analyst Abhilash Kumar commented on realme’s preformance. realme’s trendsetting image and product reputation has contributed to building customer trust and brand awareness.
“At realme, we live out our philosophy, which is to dare to leap into the forefront of innovation, design and product value, which is something young people can identify with,’ says Sky Li, realme’s CEO. Though young, realme has won five top international design awards and collaborated with world-class notable designers on its products through the realme Design Studio. realme has also delivered on technological innovation, being one of the first company to utilize the Snapdragon 865/765G processor and introducing the 64MP camera on a phone. More importantly these innovations has enabled realme to introduce 5G-enabled smartphones to youths and young consumers, increasing its popularity and reputation in numerous markets internationally.
realme’s international team and DNA has enabled the company to grow quickly. Just like its young clientele, realme has taken risks to expand quickly to over 61 markets globally and is amongst the Top 5 brands in over 13 markets globally in just two years. Ranking seventh globally.
For young consumers, realme has expanded quickly to offer a variety of AI of Things (AIoT) products such as smart audio, visual and lifestyle products to complement their increasingly digitally connected lives. These products have also quickly become popular. In India, realme sold over 1 million smart individual audio devices, reaching first spot in market share in Q2 2020. So far, realme has released over 50 AIoT products in 2020, with plans to double it in 2021. Through realme, young people can dare to leap into the future, well-equipped to live life to the fullest.