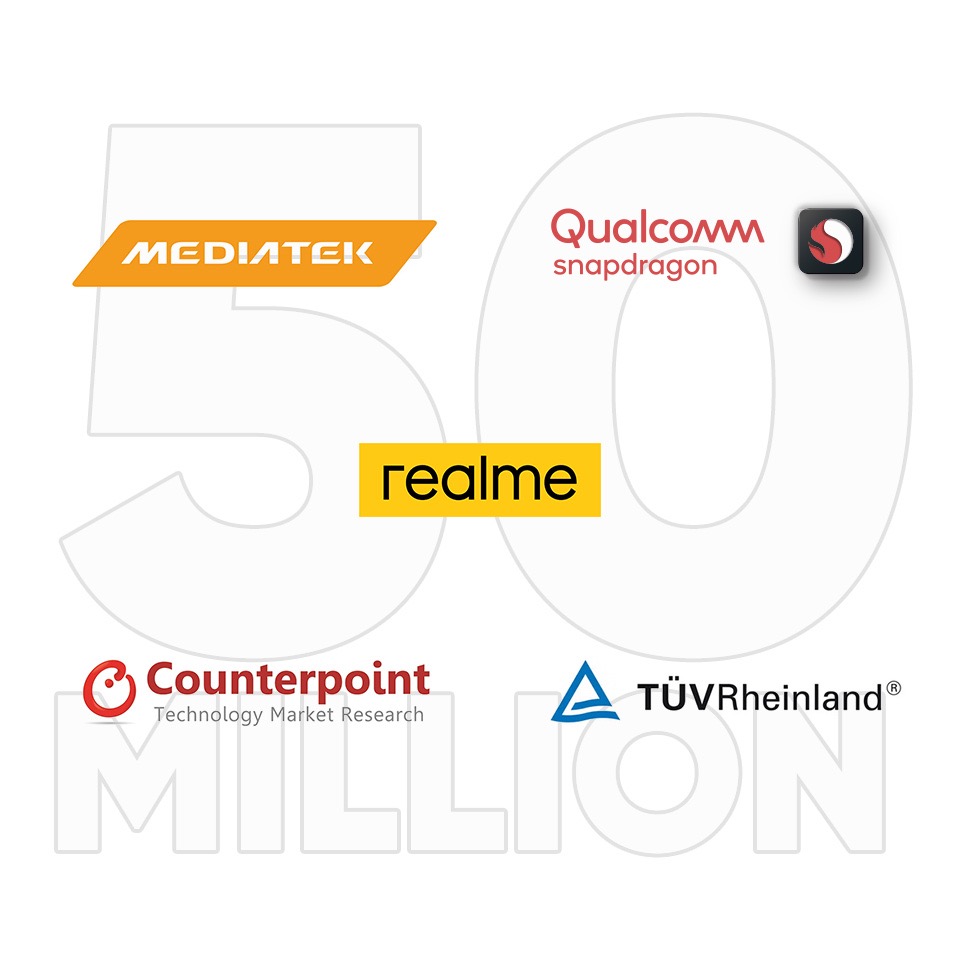 The young and trendsetting technology company, realme just become the world’s fastest brand sales record of 50 million units. This is the sales figure of the brand since its establishment about two years ago only. According to Counterpoint’s latest global smartphone report, realme’s smartphone shipments were 14.8 million units in the third quarter of 2020 securing the top seventh position in global ranking.

On this great achievement, many industry partners came forward to congratulate realme for its amazing success. Tarun Pathak, Associate Director of Counterpoint Research, congratulated realme for successfully leveraging the consumer through aggressive product launch and marketing strategy. “Not only it launched new products that were better aligned to its target audience, but also introduced them at a faster pace.”

On behalf of Qualcomm technologies, SVP and GM, Alex Katouzian, congratulated realme on reaching “the impressive milestone of 50 million in sales in just two years”. Adding to his praise he said, “This is an amazing achievement and one that could have only been possible through a differentiated and creative approach to the industry.”

realme has proclaimed a 132%+ higher growth rate than other leading smartphone brands. Dr. JC Hsu, corporate VP and GM of MediaTek’s wireless communications business unit praised realme for such incredible growth which made this success possible. Hsu further added, “As a key partner we will continue to work closely together to create new ranges of powerful, fully-featured and exciting realme smartphones, powered by MediaTek, bringing them to consumers worldwide.”

realme is known to bring the latest technology and user-friendly devices. In the third quarter of 2020, it globally launched realme 7 Pro which is the first smartphone to pass TÜV Rheinland Smartphone Reliability Verification. On reaching 50 million unit sales for realme, Kimmo Fuller, TÜV Rheinland’s Executive Vice President, applauded the brand for its success. “Realme and TUV Rheinland share the same commitment to high quality and reliability. We are pleased to partner with realme this year to bring better and more reliable smartphones to users worldwide” said Fuller.

The youth brand, with the slogan “Dare to Leap” has been bringing forward many great products in the market. realme has proved to be one of the top-selling brands by reaching a high mark of 50 million units sold in a short time of only two years. The brand comes as a real challenge for its competitors claiming a growth rate of more than 132% in comparison. realme aims to strengthen existing partnerships & to explore new horizons in the days to come.